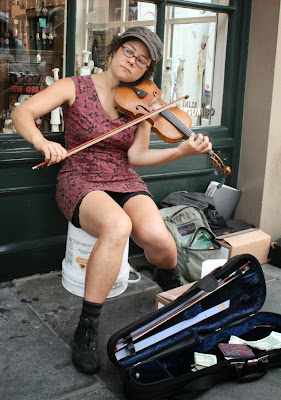 
While only in her early 30s, Shaye had already given us some wonderful compositions. Think of the very entertaining and clever Blue Chime Stomp. Remember the haunting Owl Call Blues. And there was Salamanca Blues - a lovely melancholy piece with themes in F and then Ab, giving plenty of opportunities to the trombone and guitar.  Watch it in this performance: CLICK HERE.  As you can hear, it starts with a pleasant 12-bar blues theme in F, played by Barnabus. After that, so many interesting things happen: an other-worldly 16-bar theme led by Shaye; then a switch to the key of A flat and some lovely 12-bar blues sequences (including those played with a 'break' on bars 7 and 8 by Craig and Barnabus and Todd - always signalled by Shaye's outstretched leg). It's an early example of the beauty and complexity of Shaye's compositions. I should think she must still be very proud of it.

The medium-tempo Tangled Blues is a particularly clever composition: as its title suggests, it sets us plenty to 'untangle', with pretty, wistful phrases popping up in different keys and in two different themes - one of which runs for the highly unusual length of 18 bars.

In some of her work, we might say she is following the Schoebel School of Composition. By this I mean that, just as Elmer Schoebel in such pieces as 'Stomp Off, Let's Go' and 'I Never Knew What a Girl Could Do' has unconventional linking passages that catch us off balance, so Shaye does not restrict herself to nothing but such 8-bar blocks of music as constitute about 95% of traditional jazz tunes.

Indeed, Shaye often challenges the ubiquitous 32-bar structures [four 8-bar sections, a – a – b – a] followed by popular music composers of the 1920s and 1930s. Some of her structures verge on the byzantine.

Pearl River Stomp (from 2016) springs another Shaye surprise. It begins with a bright 16-bar theme in the key of Ab. This is played through several times. Various instruments in turn take the lead, with interesting backing from the others. But just when you think it will continue like this, no doubt ending with some ensemble choruses, there is an abrupt drop to the key of Db and an entirely new 16-bar theme is played (very much like Bogalusa Strut and complete with the break in Bars 7 and 8). And it is with this theme - played only two or three times - that the piece ends.

Elysian Fields includes some apparent 8-bar sections that weirdly morph into 9 bars, with the barely perceptible addition of a holding pause.

Then there is the mighty Mortonesque Pyramid Strut, composed while the band Tuba Skinny was touring in Australia. This is the most complex of Shaye's creations. It has four themes, as well as an 8-bar bridge, and uses two keys. Lots of 'breaks' are built in and there are witty moments - such as the Coda. You can find videos of all these tunes on YouTube.

A favourite of many fans is the hauntingly beautiful Deep Bayou Moan. To my ear, it's in Ab (F minor). Elegiac, introspective, Arcadian: it has all these qualities.

Shaye's composition Nigel's Dream sounds so authentically 1920s that you could easily be fooled into thinking it was a previously undiscovered manuscript by King Oliver.

As ever, we must be grateful to the video-makers (in this case James Sterling and RaoulDuke504) for bringing this tune to our attention.

Its cheeky two-bar introduction involves nothing more than one 'Charleston' bar from the washboard followed by a single chord from the banjo, guitar and tuba. Then we are into Theme A - 32 bars in the key of C. Great use is made of a phrase (reminiscent of the Middle Eight of East Coast Trot) in which a flattened third is accentuated. Actually these 32 bars comprise two almost identical 16s; and at the end of the first sixteen (Bars 15 and 16) we have a 'break' (played by the banjo first time through and by the cornet and clarinet in a witty King Oliver-style mini-duet when the Theme is played again, led by the trombone, later).

The final bar of Theme A takes us through a modulating chord into the Key of Eb, in which Theme B is played. Twice through the sixteen bars (apparently both beginning with the chord sequence IV - IV - I - I) gives us a merry 32 bars. We then go straight back into Theme A (key of C again), with the trombone taking the lead. Then Theme B (in Eb) is re-visited. This is played through a couple of times with some boisterous, polyphonic ensemble, giving the piece a great ending. There is a neat Coda of just one bar.

FOOTNOTE
The 2020 Edition of  'Tuba Skinny and Shaye Cohn', by Pops Coffee, is now available from Amazon. 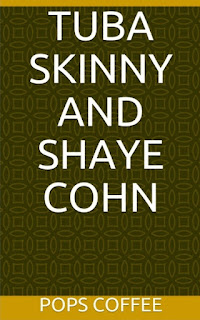