Have you come across the wonderful band called 'Frog and Henry'? 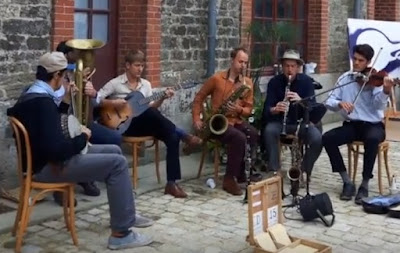 Well, they are just as much a concept as a band, as they appear with any number of players from two to about seven (but mostly six) and the personnel changes constantly. But what you can always be sure of is that they offer the highest standards of musicianship and teamwork.

Have a look at these two videos:

Different line-ups; but you see what I mean?

Frog and Henry describes itself as 'a brass and string band specializing in early Jazz, Ragtime, and Jug Band music'. If you explore the videos of the band, you will see how brilliantly it achieves these aims.

They do indeed use strings, including violin, frequently with a couple of reed players. Their house-style does not normally seem to require a full-kit drummer or a trombone but there is sometimes a cornet or trumpet player.

The band has toured in Italy, France, Belgium, Germany, Switzerland, Turkey, Austria, the U.K., Poland and Canada, as well as performing frequently in the U.S.A., notably in New Orleans. Not bad, eh? And it has more tours planned for the future.

I have never had the pleasure of seeing Frog and Henry in performance but my impression is that the band's guiding spirit is Ryan Baer - a charming and modest young man who is a multi-instrumentalist but mainly plays the banjo or guitar or mandolin with the group. Ryan, who is a Canadian, I believe,  used to be a member of Tuba Skinny. Wherever he is - in the USA or Europe - he manages to attract some of the most gifted local musicians from other bands; and they join him in lovingly and dexterously playing the wonderful old tunes. I have noticed that Robin Rapuzzi and Ewan Bleach enjoy playing in this band. Ewan even composed 'Berlin Rags' specially for them. CLICK HERE to enjoy their performance of Ewan's tune.

The band has recorded two albums (as at 2018). Full information is available on Bandcamp.
Posted by Pops Coffee at 01:00

Search for a name or topic in this Blog

Erika Lewis An American musician - Lou - has become a very good pen-friend after first writing to me about an article in this Blog ... 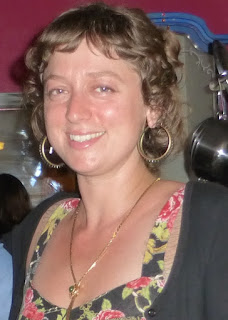 To Send Me A Message