Introduction
My book on Tuba Skinny and Shaye (2021 Edition) is now available on Amazon: 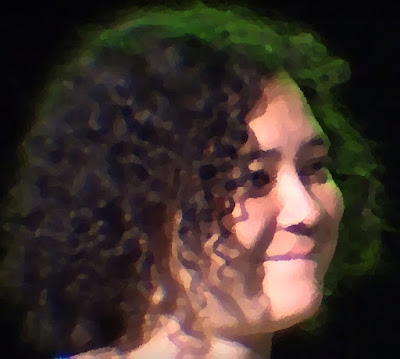 Even after nine years of listening to Shaye Cohn, I'm constantly astonished by the calibre of her thinking. Wonderful improvisations seem to flow effortlessly from her cornet. Time and again, she creates a musical phrase and I feel I know what's logically coming next. But her solution is better than anything I could imagine - a surprising leap, or a challenge to the harmony that throws a new light on things. She turns a corner when you least expect it. And these events happen with such energy and often at high speed.

But let us begin with some basics about her.

Since October 2019, Shaye Cohn has been playing a King Master cornet.

But back in about 2007, she used to play a pocket trumpet. You can see her busking powerfully and joyfully on her pocket trumpet in videos dating from 2008. 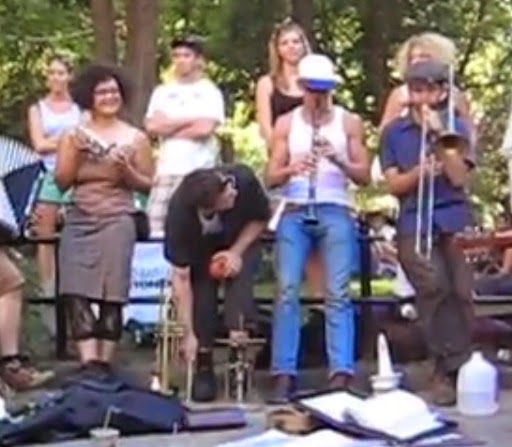 But here's Shaye Cohn's famous kit as used for at least ten years until October 2019. 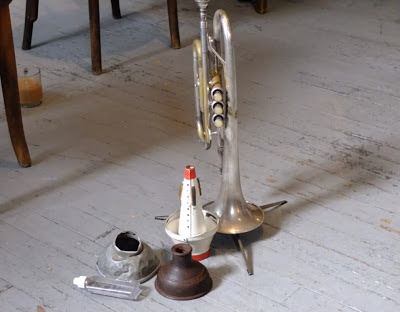 What do we spot? First, a long-model cornet that is surely older than Shaye herself. Its plating is worn round some of the tubes and valves, suggesting that it has had heavy use for many years. In close-up, you can see what a museum-piece it is. 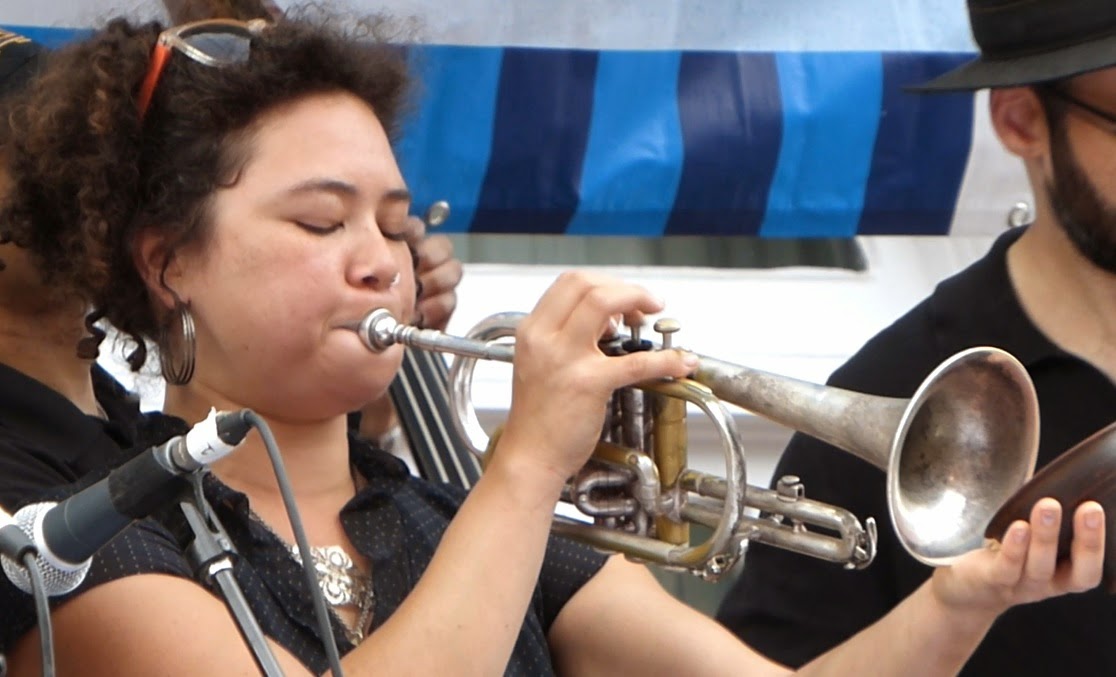 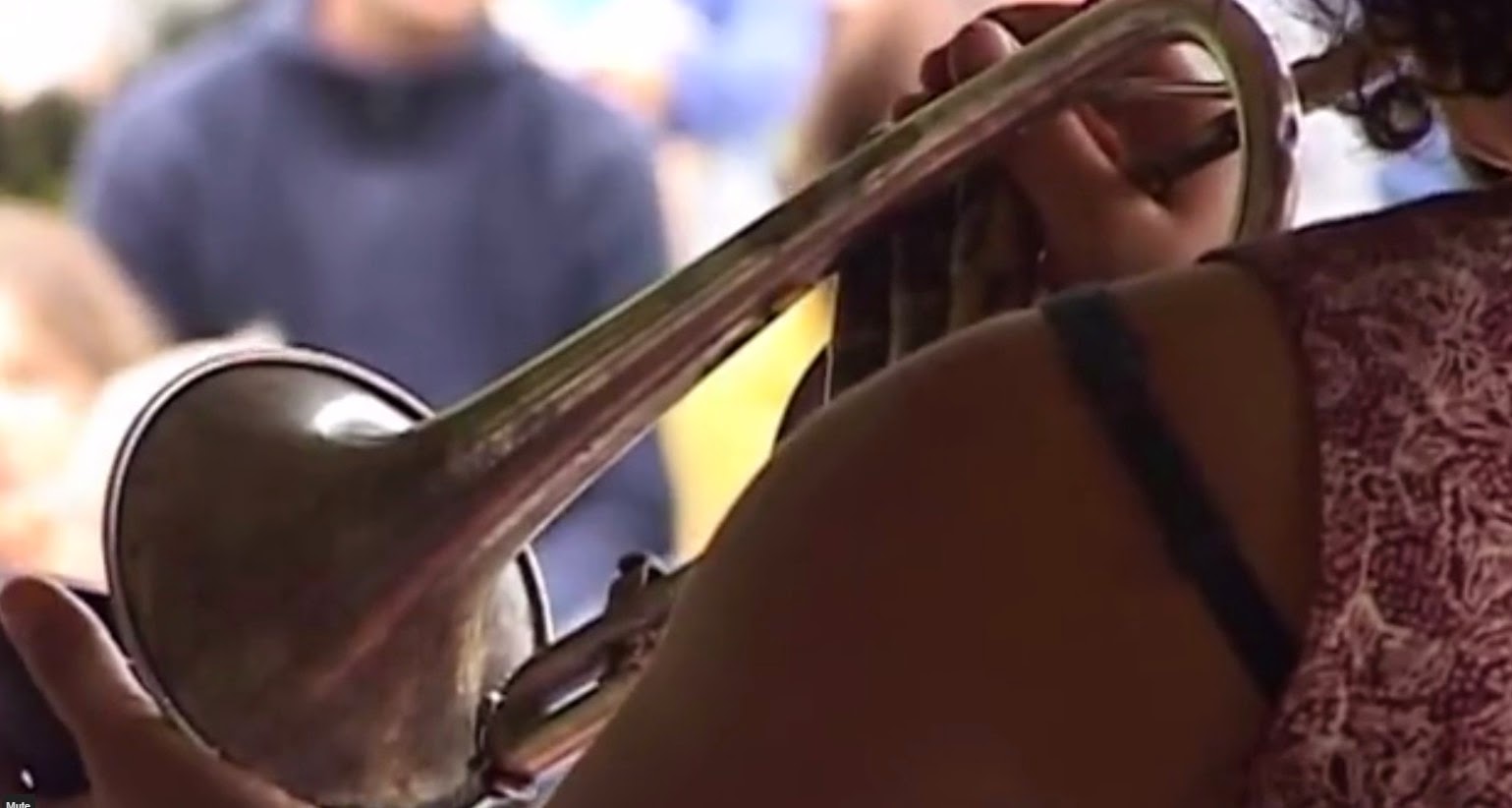 A correspondent has told me it was made by Yamaha. To me it looks like a YCR-234 from the 1970s. It's the kind of cornet you could pick up on an Internet auction for about 100 dollars.

Here, for example, is a cornet that has recently been sold on an internet auction in the U.K. for a mere £56. It came complete with mouthpiece and case, and in full working order. 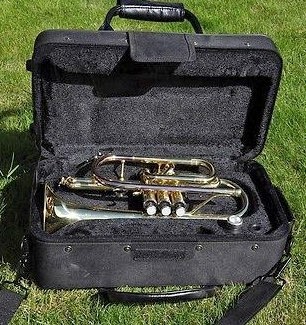 Next to the cornet we see (white and red) a Humes and Berg 102 stonelined cup mute. With this, Shaye achieves the most glorious, crisp jazzy effects.

The same is true of the other two mutes - the black rubber plunger and the amazing battered piece of metal that constitutes another terrific sound-modifier. I did not know whether this was home-made or whether it was produced by a professional mute manufacturer. I had never seen another like it. But Bob Andersen tells me it is simply an 'aluminum canning funnel'!

Finally - proof that Shaye likes to keep the cornet in good condition with freely-moving valves - there is the tube of valve oil lying on its side. If I'm not mistaken, it's Al Cass 'Fast' oil from Massachusetts, which is held in high regard by brass players. You can see Shaye using it to lubricate a sticky third-valve piston (at 1 min. 50 secs.) by clicking here.

Yet, with this modest kit (total value about 180 U.S. dollars [£120 sterling]) Shaye produced some of the most sublime traditional jazz to be heard in the world today. There could be no better proof that a really great performer can strut his or her stuff without recourse to expensive equipment. 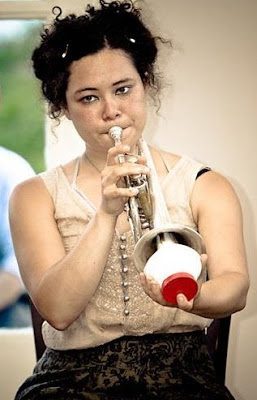 The band in which she mainly plays is called Tuba Skinny.

Shaye is not a showy player. Not from her will you hear those screaming, raucous, high-note 32-bar solo choruses to which so many traditional jazz trumpeters resort.

Shaye has said: 'One thing really important to The Loose Marbles was ensemble playing. When I first started with them, I was playing second trumpet. So I had to work to find a voice where I could fit in. It taught me to play very simply, and to listen'.

Shaye has an instinctive understanding of rhythmic possibilities, subtle and surprising harmonies and progressions, even when improvising at high speed. She can 'bend' notes to great effect and in exactly the right places.

She always works hard to encourage great teamwork from the band, not just to display her own skills. Her playing takes account of (and usually directs) all that is going on around her.

In fact, she seems to be the arranger of the music for Tuba Skinny - discovering long-forgotten gems from recordings made by jazz bands and string bands and jug-blower bands 80 - 90 years ago, and making them sound completely fresh and exciting, with all the armoury of breaks, stop chords, long-held notes, offbeat rhythms, clever introductions and codas, key changes and so on. Shaye holds all this in her head for an astonishingly wide repertoire of tunes.

Shaye also takes great care in setting tempos before a tune is started. And when a fast tempo is required, she and the band ensure it is maintained with excitement and no dragging later in the tune.

On top of all this, Shaye is a fine composer of tunes for traditional jazz bands. On YouTube you can witness performances by Tuba Skinny of Blue Chime Stomp, Nigel's Dream, Owl Call Blues, Pyramid Strut, Salamanca Blues, Deep Bayou Moan, Elysian Fields and Tangled Blues - all of them fine pieces of music composed by Shaye for the band.

And that is not all. Shaye is also one of the best traditional jazz pianists! You can enjoy evidence of this by clicking on
THIS VIDEO.
You can also find her contributing lustily on piano in a 'country' music group, playing some cowboy-style music by clicking here.
And Shaye's talents do not end there: she may also be heard and seen on You Tube playing the violin and the accordion (and even the spoons!) very well indeed. In 2016, she even took up playing the trombone - and formed an all-female band that she called The Shake 'Em Up Jazz Band: 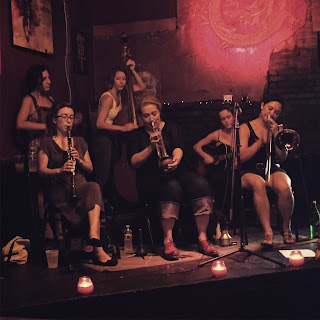 Enough. Why not sit back and enjoy Shaye and her friends doing what they do best? Great stuff from all the other members of the band too. Their singer is Erika Lewis:
CLICK HERE

It is often said that Shaye inherited her talents from her father and grandfather - both of them famous in jazz history for their own contributions. There may be some truth in this, though I am sure Shaye has worked extremely hard to develop her own skills and versatility and to play the music in her own way. I also believe greater credit should be given to her mother - a very fine jazz pianist and singer who, in my opinion, may have had an even deeper influence on Shaye.
-----------------
The Cornet Tone of Shaye Cohn 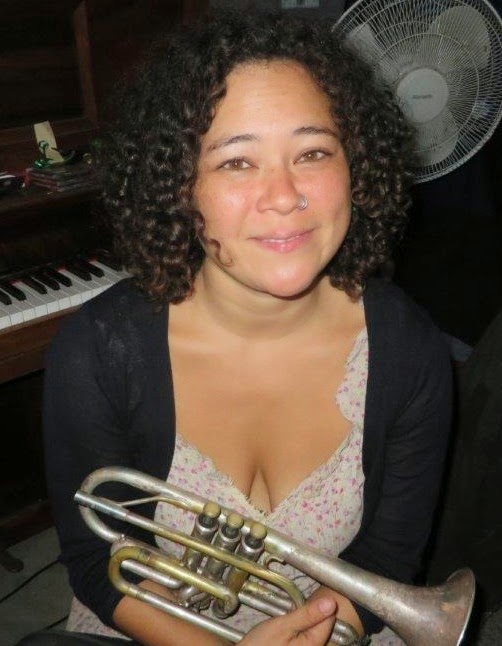 It is impossible to put into words the quality of a sound. We can only do our best.

So let me say first that most cornet players aim to produce a beautifully clean, clear, open, round, full tone. Think of the best English brass bands. (By the way, brass bands in England - the type who participate in national contests and who perform in park bandstands during the summer - are quite different from the jazz 'brass bands' that you find in New Orleans.) The cornet players of such bands as Black Dyke, Brighouse and Rastrick, Foden's and Cory are examples of players who achieve this angelic purity of tone.

But traditional jazz cornet (and trumpet) players need a tone that is a little bit rougher and that allows for jazzy effects - bending notes, being bluesy and occasionally even rasping a little. Very few of them have much use for that sublime purity of tone common among the top English-style brass band players.

And Shaye Cohn - possibly the best and certainly the most interesting traditional jazz cornet player to be heard today - has succeeded in developing a tone that is perfect for her 1920s style of music. It is distinctive and unique. I can't think of any other cornet player who sounds or has sounded like her. At best, I can say her tone is a sort of mixture of those produced by George Mitchell (1899 - 1972) , Thomas 'Papa Mutt' Carey (1891 - 1948) and Natty Dominique (1896 - 1982).

She used to pick up that very old Yamaha cornet and off she went - always producing an amazing tone that is immediately recognizable and that is such an essential ingredient in the success of her band - Tuba Skinny. The remarkable tone is always striking, no matter how fast, or athletic, or creative the musical phrases she produces. Now she is doing the same with the King Master cornet that she acquired at the end of 2019.

How does she achieve it? I doubt whether even Shaye knows. It must have something to do with the physiology of her mouth and the way she uses her lips. I guess it is instinctive rather than cultivated.

She loves her mutes - especially the plunger and the Humes and Berg 102 stonelined cup mutes; and she uses these for tonal effects. She particularly enjoys holding them only partially inside the bell of the instrument. 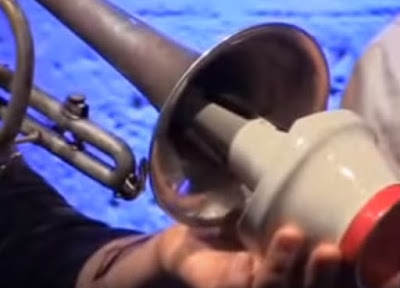 But these alone do not account for her special tone. Observe her even when she is playing without a mute: the sound is still distinctively her own.

If you are a cornet player and think you can produce a sound exactly like Shaye Cohn's, well - just try! I doubt whether you will get anywhere near it.

This tone, combined with the creativity, energy and subtlety she puts into all her playing, makes Shaye the outstanding traditional jazz musician of her generation (not to mention that - as I have said - she also pays brilliantly on several other instruments - notably the piano and violin!).

If by any chance you are still discovering Shaye, I can tell you there are plenty more videos in which you can witness her wonderful playing for yourself.

For example, you could start by

or here.
And probably the most amazing thing about Shaye's cornet playing is that she did not even begin learning to play the instrument until she settled in New Orleans after Hurricane Katrina. Following a classical music training, she arrived in New Orleans as a player of the piano, accordion and violin. ===============

(1) CLICK HERE  to watch a video of Shaye playing accordion with the phenomenal Mucca Pazza Band in the days when she was about 24 years old and before she moved to New Orleans.

(2) Here's an email typical of dozens I have received from my blog readers:
How I wish I could play at all! One of the things I find so thrilling about Shaye is her attack. She raises her cornet to her lips and bang, she hits her first note sweetly and cleanly without any straining or apparent effort and beautiful tone. Marvellous. I can think of no other player to compare in the current jazz world and she has such empathy with the New Orleans tradition.
Posted by Pops Coffee at 02:00