If you were asked to name the most important traditional jazz band so far in the 21st Century, what would your answer be?

My own, unhesitatingly, is The Loose Marbles.

To put it briefly, because this band has done the most to regenerate our music and to encourage and stimulate the terrific resurgence of traditional jazz among the younger generation (particularly those now based in New Orleans) and because, with the help of YouTube and CDs, it has also encouraged a resurgence of our music throughout the world.

The band was given its name by its founder, the clarinet-player Michael Magro, who grew up in Philadelphia, and he is still running the band today. I have met Michael only once - in New Orleans on 11 April 2016. I found him most friendly, serious-minded and eager to talk about his music.
After all these years, none of his enthusiasm has diminished. Deeply influenced by the recordings of George Lewis, Albert Burbank and Jim Robinson, he is as passionate as ever about the music; and he is clear about how he wants to play it. I think it's fair to say that he likes to put the emphasis on ensemble work. He prefers the kind of traditional jazz that was played before Louis Armstrong and his Hot Five set the fashion for sequences of 'solo' choruses.

Yet Michael did not begin to teach himself the clarinet until he was in his mid-twenties.

Michael told me about those early days. He chose the memorable name Loose Marbles partly because of the connotations of the expression but also because the concept of 'looseness' was always part of his plan. This was to be a band without a regular fixed line-up. All good and like-minded musicians would be welcome in his pool of players. The Band played for a year or so before a break in its history.

Then Michael met Ben Polcer (trumpet and piano). Ben, the son of Ed Polcer, the traditional jazz trumpeter, had graduated at the Music School of the University of Michigan. He joined Michael in the Loose Marbles enterprise and has been driving The Loose Marbles along ever since. For a while they were based in Brooklyn, New York. In 2006 they developed for a few months by playing street music in Washington Square Park, New York City.

Then, the year after Hurricane Katrina, Michael and Ben permanently relocated to New Orleans, trying their luck by playing for tips on the streets. They have been based there ever since. On occasions, they would return to New York City in the summer months, again giving street performances.

I heard that they sometimes had so many musicians available that there would be two Loose Marbles bands in two different locations simultaneously.
During the following three or four years, so many of today's great traditional jazz musicians migrated to New Orleans and appeared as Marbles, honing their skills in the company of Ben and Michael. These included such people as Charlie Halloran, Aaron Gunn, Tomas Majcherski, Jason Jurzak, John Rodli, Robert Snow, Jon Gross, Dan Levinson, Alynda Lee Segarra, Kiowa Wells, Ryan Baer, John Royen, Peter Loggins, Robin Rapuzzi, Joseph Faison, Matt Bell, Max Bien-Kahn, Jonathan Doyle and many others. Shaye Cohn frequently worked with the band, but mainly on piano in the early post-Katrina days; and Barnabus Jones, who had recently taken up the trombone (in addition to being already a good violinist and banjo-player), was frequently present. They had a powerful vocalist in Meschiya Lake.

There is a video of considerable historical interest of The Loose Marbles in a 2008 configuration, performing at Preservation Hall. You can watch it by clicking here. And see them in the street the same year (with Kiowa singing and Shaye on piano) by clicking here.

As dancers migrated to New Orleans, they tended to join the Loose Marbles family too - stars such as Chance Bushman and Amy Johnson; and they became part of the spectacle. The band busked in Europe in 2007: enjoy the dancing by clicking here.

John and Marla Dixon (now at the heart of The Shotgun Jazz Band) arrived a little later, but they too intermingled with the Marbles and still work closely with them to this day.

Some of the musicians who played in The Loose Marbles have gone on to form bands of their own. Think of Tom Saunders and the Tom Cats, for example. And Meschiya Lake, branching out into a wide range of musical styles, now sings with her own very popular band Meschiya Lake and The Little Big Horns. Above all, there is Tuba Skinny. Shaye Cohn of Tuba Skinny has said: 'One thing really important to The Loose Marbles was ensemble playing. When I first started with them, I was playing second trumpet. So I had to work to find a voice where I could fit in. It taught me to play very simply, and to listen.'

So The Loose Marbles still exists and is attracting plenty of gigs. As the sixty or so musicians who have played in Loose Marbles all still feel part of the family, it is easy enough for Ben and Michael to put together half a dozen of them to play at a gig.

To view a really pleasing and exhilarating video of the band in 2015 CLICK HERE. Michael is still in a central rôle, leading off with the melody in the first chorus. Marla is on trumpet and vocal.

Interesting to think that, although we fans in our eighties regard all those musicians currently working so well in New Orleans as the 'young generation', the years seem to have passed so rapidly since Hurricane Katrina that it won't be long before Ben and Michael are considered the 'elder statesmen' of traditional jazz!

Having said that The Loose Marbles is the most important traditional jazz band of the early Twenty-First Century, I must add that I consider Michael Magro himself as the most important individual musician. If you speak, as I have, to some of those slightly younger musicians who have settled in New Orleans since Hurricane Katrina, you find they all have immense respect for him and they are all grateful for what he has done. Another reason why I consider him so important is that he has a very clear idea of how he wants a band to sound. As soon as he takes charge of a group of musicians, something magical happens. He is one of the few great leaders who can immediately impose a style that brings out the collective best in his colleagues. For proof of this, even as recently as 2016, watch this wonderful programme:
CLICK HERE.

Finally, here is a picture Bob Andersen sent me of a Loose Marbles 2009 line-up (including himself on this occasion). He scanned it from a newspaper of the time. 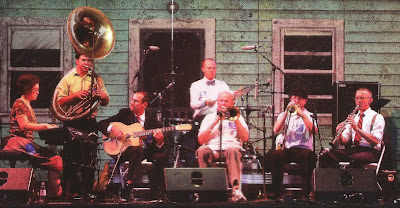 Bob says the picture was taken at the Portland, Oregon, Blues and Jazz Fest. You see Shaye on piano, Robert Bell on guitar, Jason on tuba, Ben, Michael and also Benji Bohannon on drums.

The book Enjoying Traditional Jazz by Pops Coffee is available from Amazon. 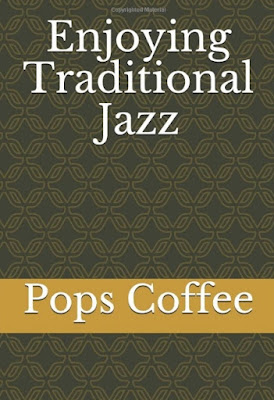